Vegeta, a character that took everyone by storm the moment he appeared on the screen. A character that made us think of him nothing more than Nappa’s assistant made us think otherwise a few minutes later. A character that made the old saying well understood and crystal clear that, ‘Appearances are often deceptive’. His bout with Goku made him our favorite in an instant and all of us wanted to see more of him. Akira sure heard us and brought him in as one of the main characters that the show would be featuring later on. He’s got all these sides to him and has matured a lot since his debut back in the Saiyan Invasion arc. One thing about him never gets old though, his desire to be impeccable and the very best out there. He sees Kakarot as someone who he must surpass no matter what and he works harder than anyone else to make that happen. Vegeta is the coolest ‘good’ character Dragon Ball has introduced. A lot of people regard him as the best regardless of Goku being the face of the series. Nothing would be better to show your love for the character than a Vegeta T-shirt now wouldn’t it? We’re here to help you with that and would walk you through the Top 10 Most Wanted Vegeta T-Shirts. Let’s dive right into it. 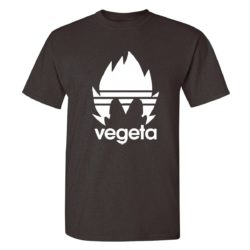 Let’s keep things plain and simple in the beginning. Adidas is pretty big here in the real world. It might be a thing there in the Dragon Ball universe but we haven’t heard a word from the creators so it’s better not to jump to conclusions. This Vegeta T-shirt is simple yet has that stylish look to it that makes it stands out. Sometimes simple is the best thing out there. The black makes the hair come here in the real world, the hairstyle we’ve spent countless hours pulling off just to look completely different at the end. 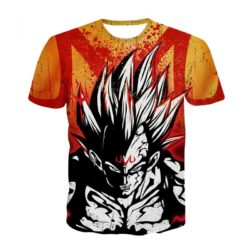 The Majin Buu arc had a lot going on. There was that tournament and Buu’s awakening and a bunch of stuff happening with Goku in the afterlife. It was a lot. But one thing was unexpected. I mean we all know that Vegeta has this undying thirst when it comes to power and strength and he’d do anything in his might to be the strongest warrior this universe has ever seen. But to embrace the Majin’s symbol just to take down Kakarot was a bit too much Vegeta. Having acquired this power recently, he was all ready to wipe the floor with Goku and that was one hell of a fight making us remember the old days when they fought for real for the first time. This Vegeta T-shirt is the best one for all those fans who think of Majin Vegeta as the most badass form of Vegeta out there since it was wild in more ways than one. 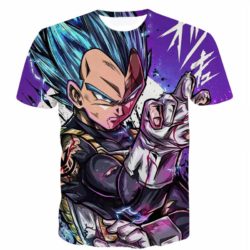 Dragon Ball Super started out slow. We had a retelling of the two movies we had watched over and over again to the point that the spoilers were all over the place at the theatres. The battle of the gods movie introduced Beerus as the new op character making Frieza and Cell feel insecure about themselves. But at the same time it had been a while since we saw another power spike when it came to the Super Saiyan forms. Akira throwed that Super Saiyan god form making us see a red tinge to the yellow we can’t get enough of since day one. But later on he served us more we can handle with that blue form as well. Now Vegeta and Goku was literal gods. The SSGSS Vegeta form was a huge power spike and it made him more intimidating and powerful than it ever was. This Vegeta T-shirt is the best thing for Dragon Ball Super fans, especially cause of the fact that now Goku and Vegeta were even. 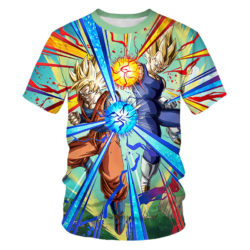 Goku and Vegeta could be the best tag team duo out there. I mean both of them have powers completely out of this world and don’t back down from a fight no matter how worse things get. Plus, they has some attacks that would synergize well with each other. But the only time they work together is when they’re on the dance floor with that fusion dance running wild all over the place. They could make Jeice and Burter look nothing but paint on a canvas since they would out shadow them by a whole lot. This Vegeta T-shirt is perfect for those out there who think that this tag team duo should take on some baddies and show them just what the words resonance and sync mean. 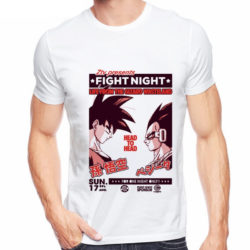 Okay this poster is the best one I’ve seen. Whether you’re a UFC fan who just can’t get enough of those PPV or a WWE fanatic who turns a blind eye to the fact that those are all just professional stunts, you can’t deny the fact that this surpasses anything you’ve ever seen before. That wasteland hadn’t seen those power levels ever before since they were in a league of their own. The fight, from the beginning to the end was full of adrenaline and made us jump all over the place when we were kids. This Vegeta T-shirt brings in the nostalgia and hits us right in the feels for it reminds us of his debut in the legacy that Dragon Ball is today. 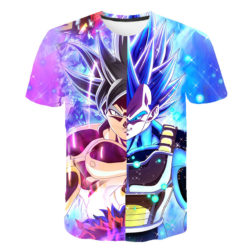 By the end of Dragon Ball Super things had got a lot heated. We had that multiverse tournament with all the universes vanishing one after another as if Zen-Oh was cleaning up his room full of toys. At the end Goku was styling on everyone with those moves that we hadn’t seen before in any anime. Sure Vegeta didn’t get that ultra instinct form since Akira treats his children differently but we can’t deny the fact that he brought a lot of them people down making it easier for all those people out there. Vegeta sure styled on a lot of them without Ultra instinct backing him up. Just saying. This Vegeta T-shirt is memorable of that multiverse tournament that sealed the deal in the best way possible bringing things to a perfect close. 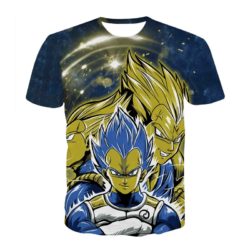 Vegeta has all these sides to him that have made him grow as a character. From the beginning to the end we’ve seen him mature in more ways than one making us see all there is to his personality and his character. He’s had his moments in the limelight as well, the majin buu all out attack being the one that stands out the most since it was the most heroic moment in his career. This Vegeta T-shirt brings in all there is to Vegeta here in one place making it an all in one Vegeta T-shirt that no one can miss out on. 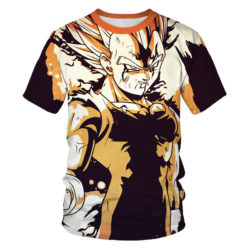 The most heroic moment ever seen in Dragon Ball history. Even Goku never shone as bright as Vegeta right here right now. Majin Vegeta was a huge turning point when it came to the character since it showed that his craving for power knew no bounds and he would do anything it took to bring Kakarot down even if it was for once in his lifetime. Talk about desperation. But he’s had enough of Akira playing favorites since day one. This Vegeta T-shirt makes the words run right in front of our very eyes, his tears, his love for his son and his wife never showed out ever before since he always kept it deep down in his heart, deep enough to forget about it himself. But it was there and will ever be. 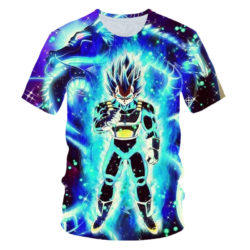 The SSGSS form was a power spike we had never seen before. It was a strength that made the characters look right in the eyes of the gods of destruction that stood right in front of them. Both Goku and Vegeta pulled off amazing fights when it came to that form bringing down all kinds of characters whether it be humans, aliens or robots. This Vegeta T-shirt keeps the gleam of the SSGSS form that we can never forget and to top things off adds a dragon at the back so it makes things a lot more spicy than they’ll ever be. It’s the best thing anyone could ask for whether you’re an oldie or a new fan recently introduced to the anime. 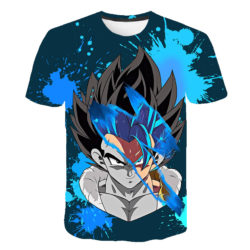 This is like the best thing ever with Vegeta in it. Vegeta fan? Check. Vegito fan? Check as well. It brings the best of both worlds since it has Vegeta and Vegito along with that blue form here at the same place at the same time. This makes it a perfect package for all the fans out there. It’s truly a Vegeta T-shirt you just can’t skip out on. One of the best out there since it’s got all to it one could ever ask for.