As one of the most feared in the Dragon Ball universe this is a collection of Jiren Fashion Merch that bring to you the back story of the character giving light to his own truth and harsh youth. Here you feel the essence to see the true side of the anger vented inside of the character making you almost feel sorry for the Pride Trooper and the honorable fighter and warrior. When a person is both good and bad it gets tough to decide the spot in which we should lay him out but, when a good person becomes bad for all the insane things done to him, his friends and family then that person becomes slightly more fearful and dangerous than God himself. 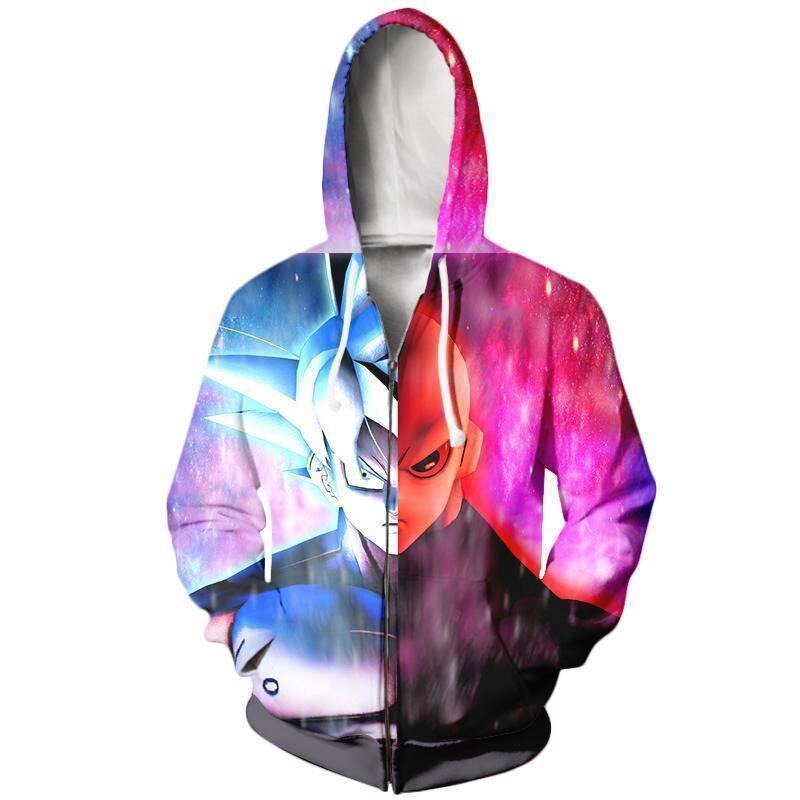 A half-cold half-hot hoodie is something that is always desired and looked for. This is a hoodie that brings to you exactly that. The hoodie is primarily divided into two parts, one showcasing Goku and the other half depicting Jiren. This Jiren fashion hoodie is something that is long desired as he is good and bad. A character who wants to have his wish granted and that’s it. This hoodie brings to you the all famous face-off between Goku and Jiren, a Saiyan and a Pride Trooper, two legends with different wishes and goals. 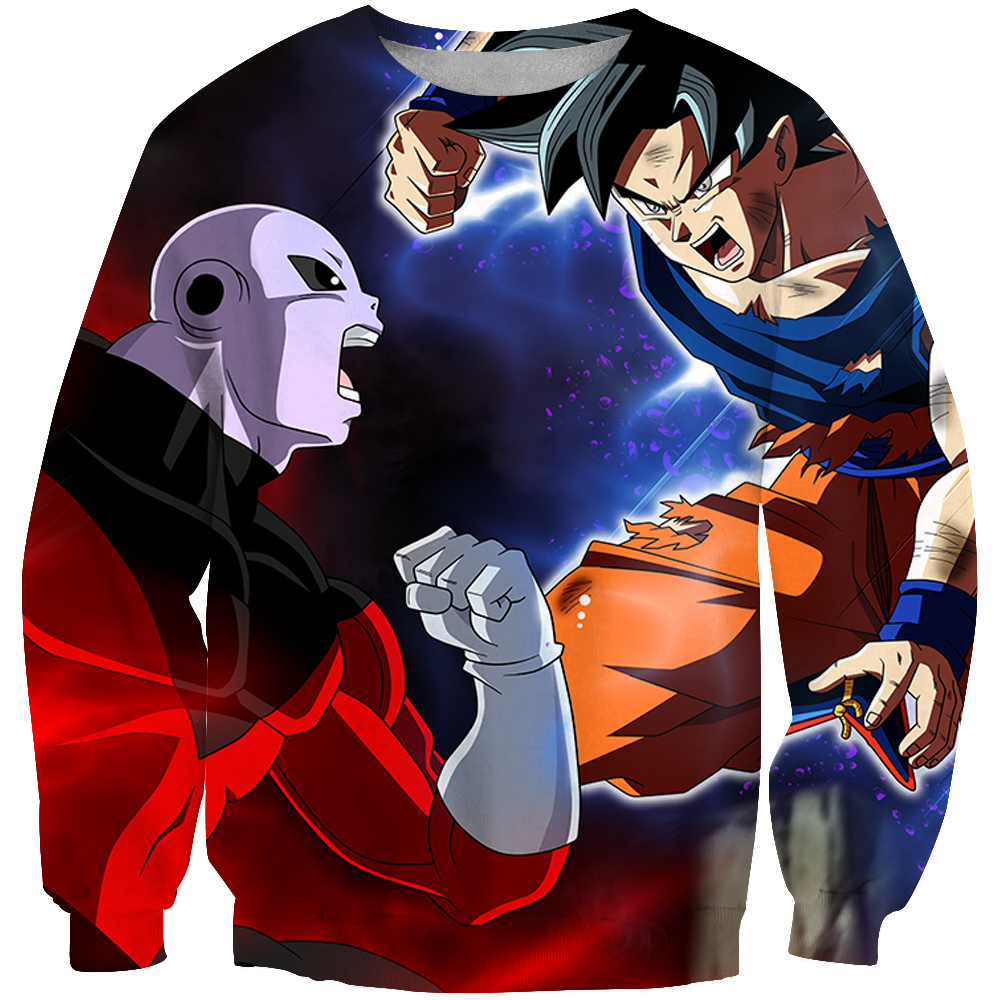 As we know Jiren is neither good or bad. He wants to have his wish granted and that’s it. However, he is a hero and loved character in his Universe. Moreover, he said “I am not saving my universe if it means to destroy other universes” so he has morals which actually means he is a good character overall. Thus, this is a sweatshirt and a Jiren Fashion merch that actually portrays the fight between two good characters and people who are both right in their own way and manner. The colors of the sweatshirt too give it a kindle type spirit making it more in favor of Jiren than Son Goku. This is a merch that you can wear on a camping trip and to a game as it is both light in contrast and a good side-fit for any fashionable clothes. 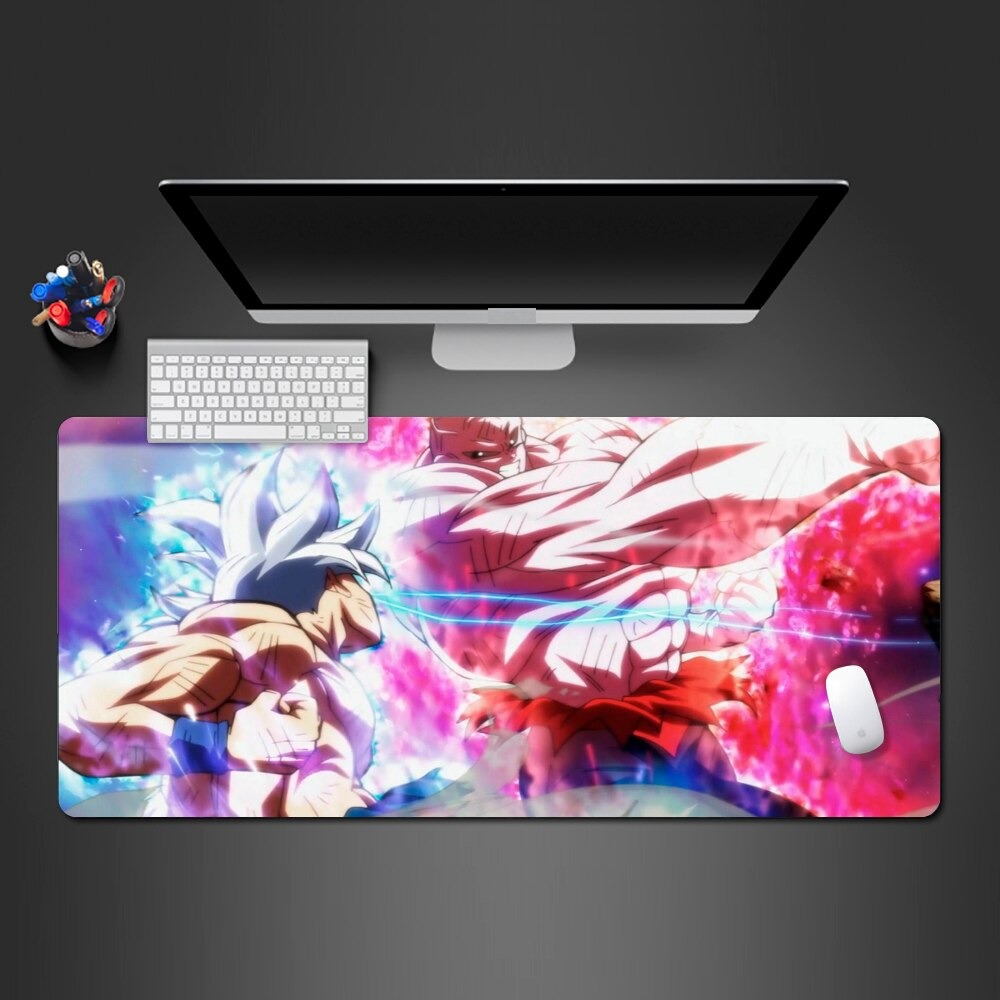 The rage of a weakling, and the compressed anger and sadness of a lonely boy is something that is both dangerous and fearful. In this mousepad you see the true power of Jiren through the design and artwork. The power and rage that he held inside when his family was murdered right in front of him and he was too powerless to stop it. The time when his friends and his teacher were murdered in front of him again and he was too weak to stop everyone he cared about from being butchered. This is a pad that shows you that once the water is filled to the brim and the suppressed feelings of those lost is at its peak, then the broken heart can no longer contain itself and allow others to hurt you even more. 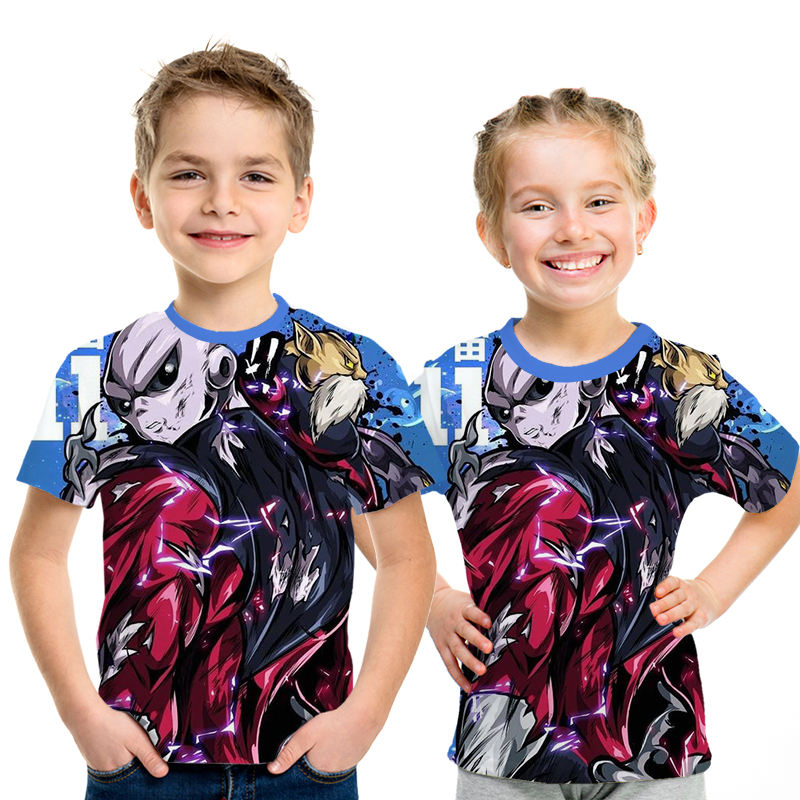 A graphic tee and a merch that makes your soul throb is the one which shows the true and the all-natural side of the beast. In this case it being the character of Jiren. This tee here showcases the natural and the true side of Jiren. The half-tilted left side of him shows the seriousness in his eyes and the sparks that emit from his body go on to show the aura that flows in him. An aura that is too much to handle and control, a power that surges inside overflowing and creating loops in time making the character loose his humaneness and get on the dirty side of the road. This is a Jiren T-Shirt that showcases the character for who he truly is, i.e., a Pride Trooper. This tee can well be used as a single suit itself or would really make a pair with Dragon Ball Z Super Shoes. 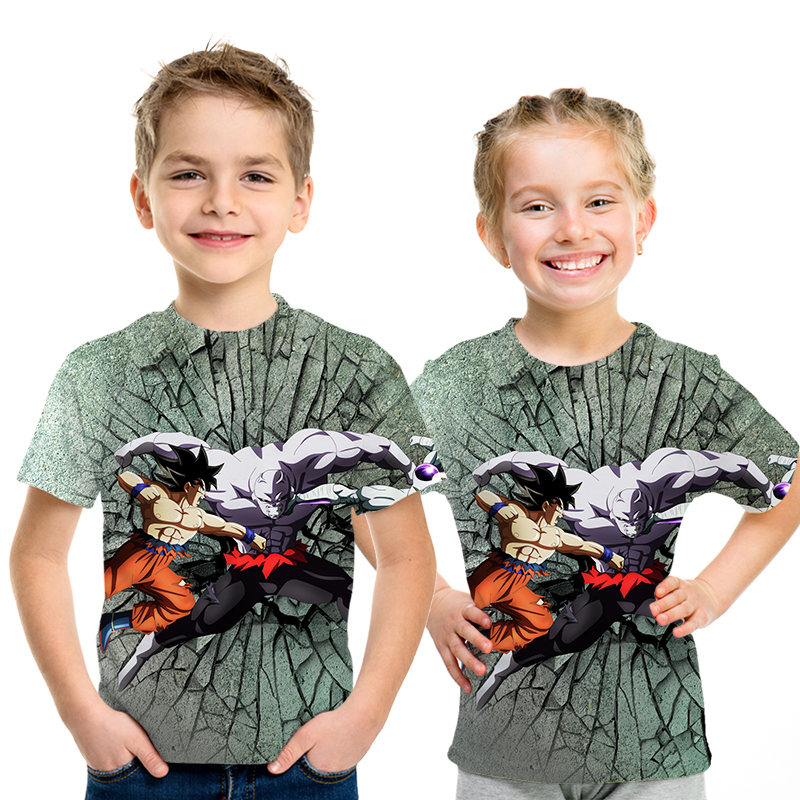 Jiren is a quiet and honorable fighter, who believes in strength and justice. He previously did not trust anyone and never considered teamwork at all during battle, opting to fight enemies alone, and single-handedly almost always winning. This tee here brings you the infamous battle between the legendary Saiyan and the honorable Pride Trooper. This is a Jiren X Goku Fashion Merch that comes in a color that lays more on the heavy side making the characters more in sync and in display. It shows us the long-fought battle between the two and the anger that each have towards the other for their different goals and ambitions. 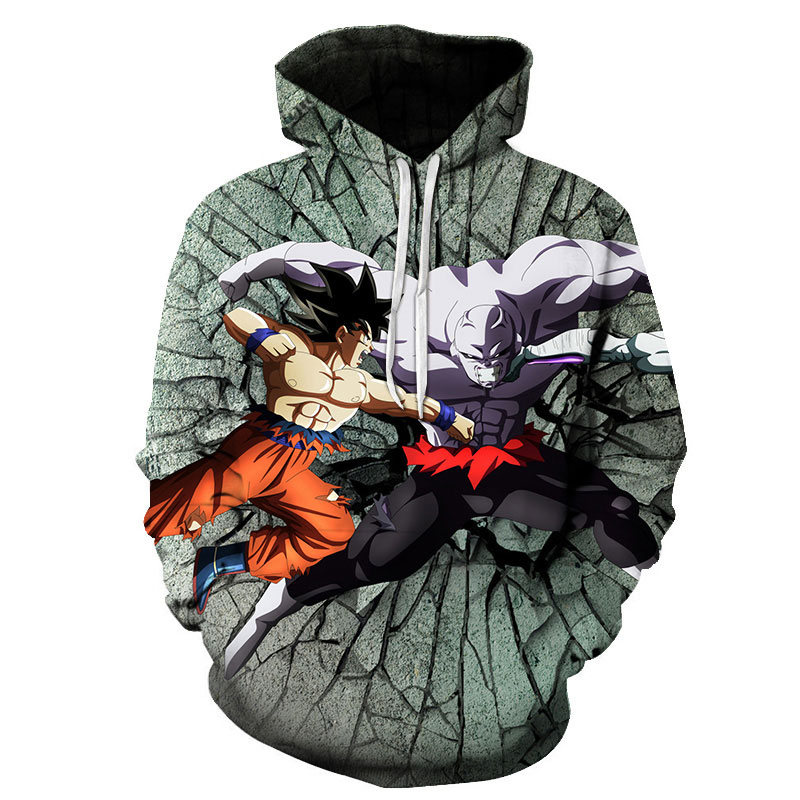 “Might makes right and might alone! Without strength, we have nothing! If I don’t win, then all my effort, all I’ve struggled to achieve, all of it will have been pointless! I’ll lose everything, just like I did before… and I absolutely refuse to go through that again! I cannot! I will not!” For the people who follow and stay tuned with Dragon Ball, this is a famous line that cannot be forgotten till now. A refusal of the warrior in “The Greatest Showdown of All Time! The Ultimate Survival Battle!” This is a hoodie that shows Jiren’s will to survive and not accept defeat, a will so strong that it sends shivers down a person’s spine. A refusal to say that sadness will not be tolerated and accepted as it is. This is a Hoodie that would complete your look the moment you put on your Red Supreme Chest Bag. 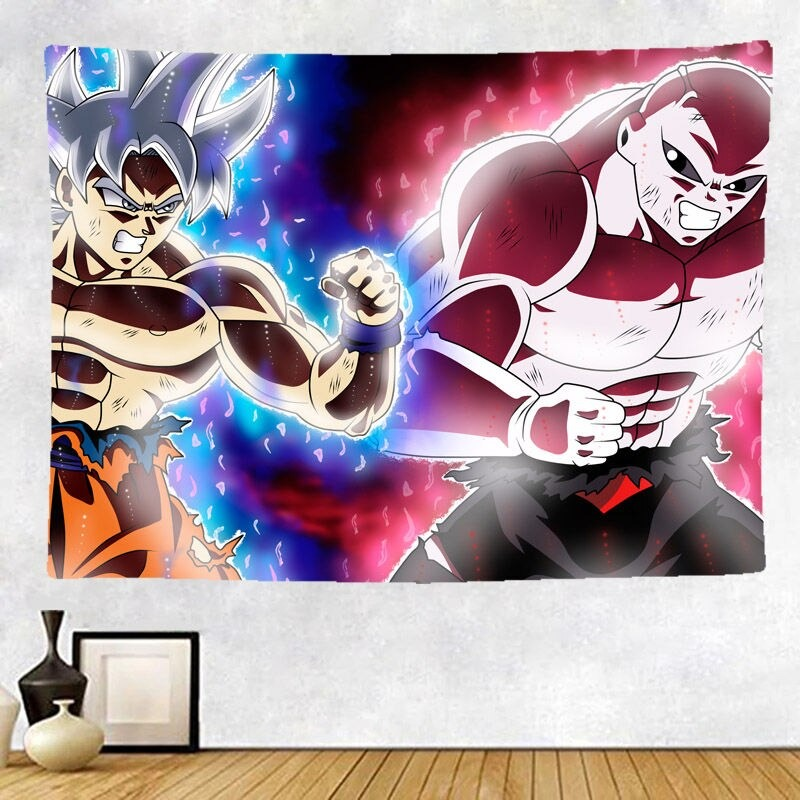 There are facts and rumors about a people and this is a fact that is so true to its last word that it makes the character feared throughout the Galaxy. “Jiren is a man who is completely devoted to justice. He never acts on any of his own desires or interests. And no matter how evil a villain he’s up against, his absurd conviction is such that he won’t ever kill them. But there is one thing… He has a wish that he’d even be willing to set aside his convictions to have come true.” This is a fact about Jiren that makes this Tapestry so set-aside and different. Here we see both the characters in high spirit and in rage which makes the product a perfect fit to have on the wall and cover space as it is both designer and sophisticated in its own terms making it one of a kind from all key aspects. 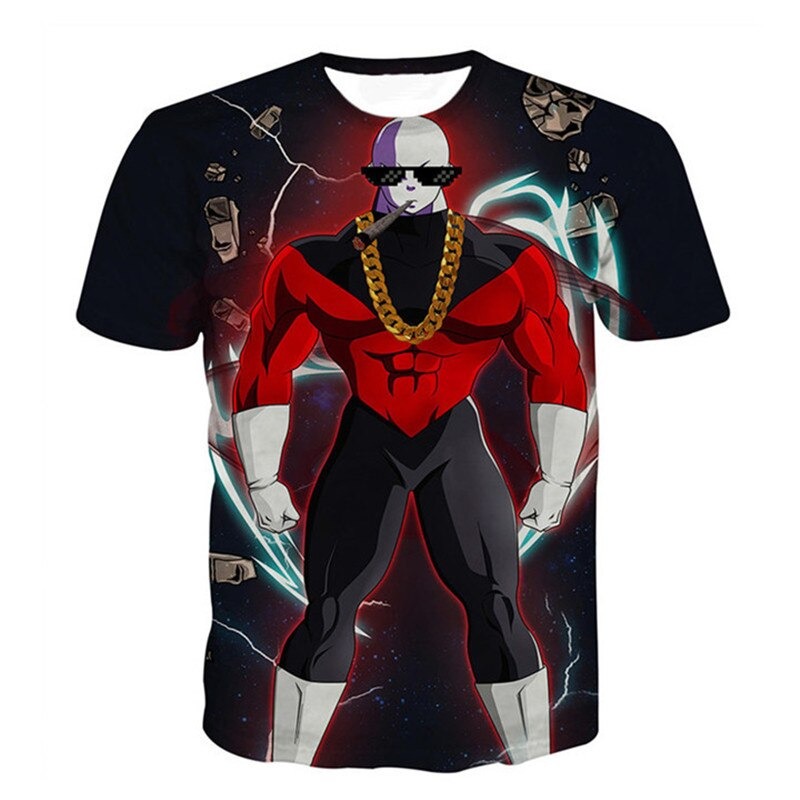 Presenting to you a Jiren Fashion Merch on the heavier side of the shelf we present to you this t-shirt. Here Jiren is seen in thug and a cool yet rage mode and the colors of aura that ooze out from him make him look more like his part. The aquamarine lightning aura that releases from him give significance to the aura that is emitted from him in the anime itself making it more down to the earth and as close to the anime as possible. The perfect way to complete the piece would be for you to pair it with your pair of ‘Vans’ making it more enriching and soulful. And while you are at it, it would also make sense if you would throw in a ‘Nike’ or ‘SuperDry’ cap to increase the coolness of the tee’s print. 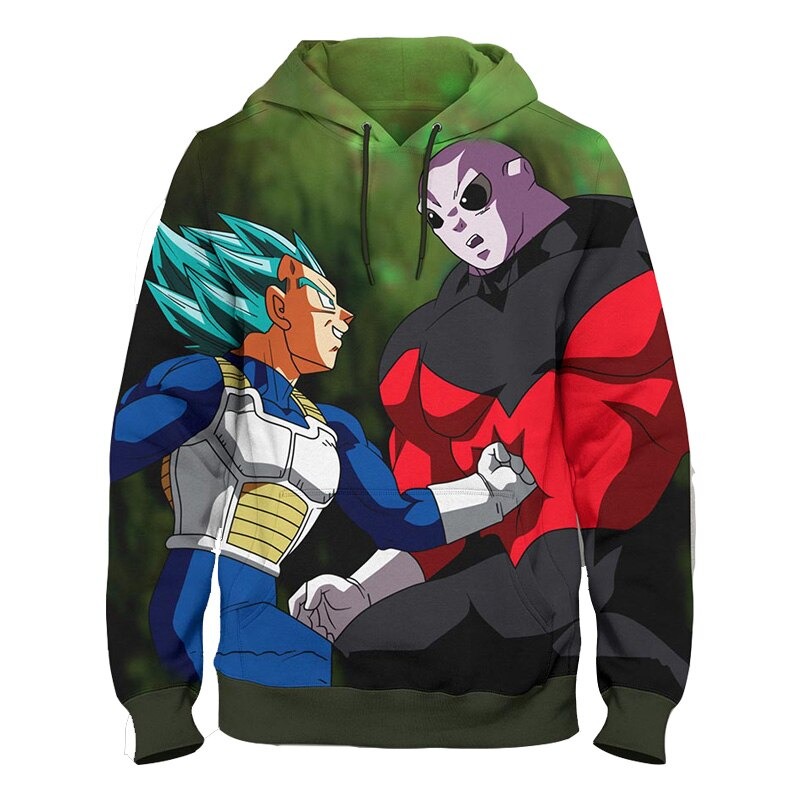 If it was a hoodie that you wanted that contained color and contrast throughout but with the similar animation to anime and manga, then look no further as this hoodie does just that. Here as you can see the animation of the protagonists is in a sloppy side of the wall making the character seem directly from the virtual world itself. The really amazing factor here is the use of background in the hoodie, as you may notice it the background looks more detailed and realistic creating the simultaneously effect of focus and not-in-focus in the hoodie. This is a hoodie that makes the look complete for any instance like that of a fan-fest or a date, a hiking activity or a sporting one and also of a cultural festival or a rock festival, as it comes in a derailed hue of swamp green making it all the more noticeable and unique. 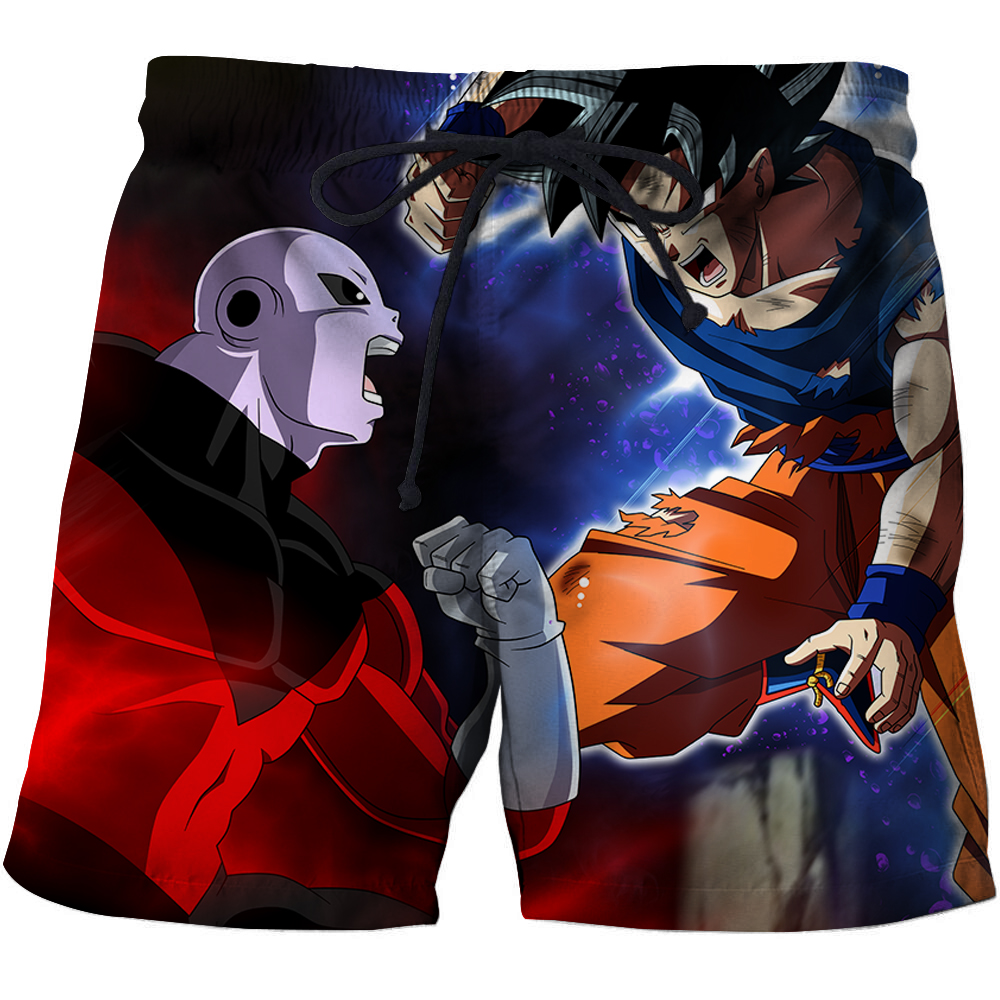 What is best said when you have a short that contain two of your favorite characters in it. This is a pair that is perfect for all the occasions as it designer and on the heavy side, Here you see the two in action which makes the shorts have a significant meaning to it rather that it having just to characters side by side on it. The action pack scene also goes on to represent the fight between the two which is infamous in the Dragon Ball universe. This is a Jiren fashion merch that would suit anywhere outdoor like the beach or the park and would really complete your look with the all new Dragon Ball Z Super Shoes and other Jiren T-Shirts.