Being a villain is something that gains you a lot of stardom and popularity, but being the lord of those villains is something that makes you rise higher than the average low-ranks, making you a God to them and in this franchise, we can imagine no one higher than the great tyrant, the destroyer of world, Freiza. The all new Freiza merch is something that is kind of ominous and cool at the same time, as it has a side to it that is both serious and funny at the same time, giving you the refreshment that you deserve and spreading the vibe that you most desire. 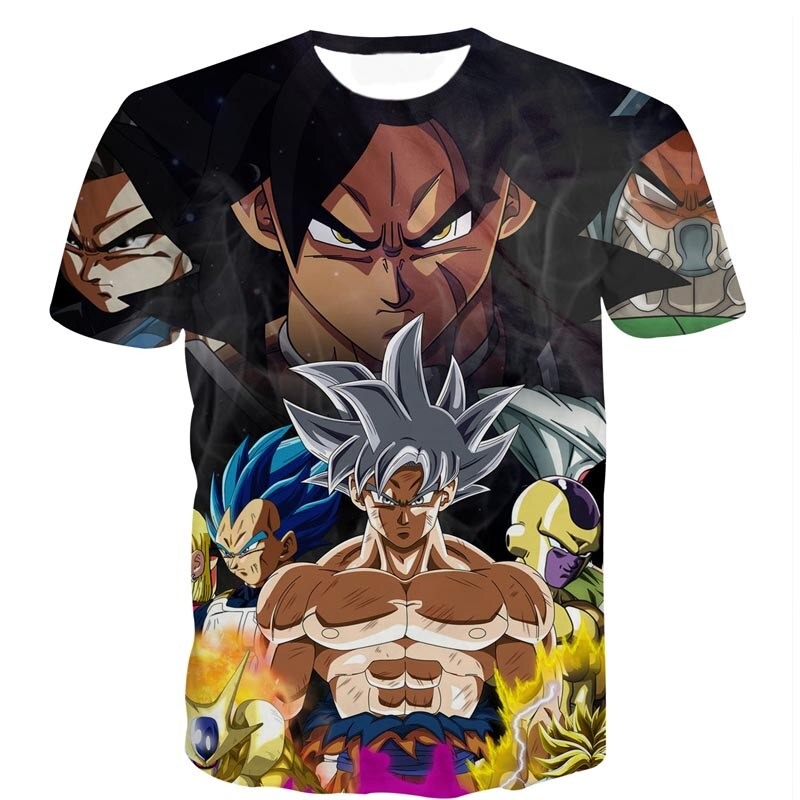 If you are stuck with the 1990s and want a t-shirt that represents just than then look no further as this tee brings you absolutely that. Here Goku is seen in confidence along with Broly, Frieza and Vegeta with complete fade-white and yellow aura around him. This tee has a fade effect in its background color as you can notice that the color from top to bottom of the tee slowly shifts from black to fade and smoky brown, as it disintegrates slowly. The Dragon Ball Z Frieza Shirt can complete your look with a pair of ‘Nike Air Max’ collection. And not only can you use that but also the sneakers from ‘Puma’, ‘Supreme’ and ‘Converse’ to complete you look as well 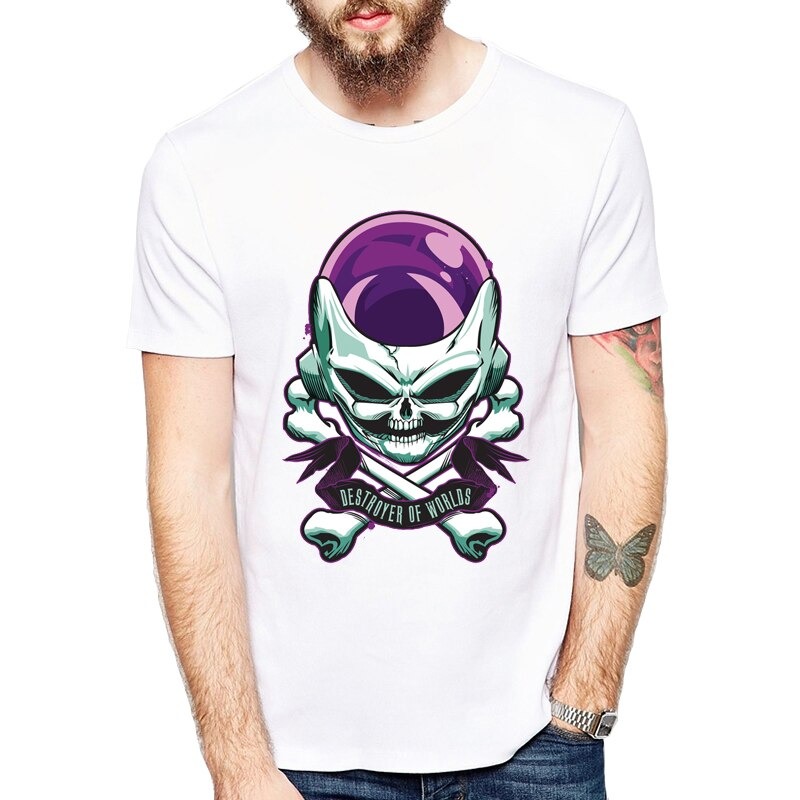 Having a tee is cool but one with the villain in it is something that rises the coolness of a t-shirt. In this Frieza Merch you have the skull or rather a kind of logo of Dragon Ball Z’s Freiza the Destroyer. To give it a more dynamic and supplement look this tee comes in a plain color of white as it highlights the logo in between making the tee more popping and outstanding. Here the main motto and the plain yet sophisticated meaning of Freiza’s existence is also laid out, i.e., “Destroyer of World” written in a scroll beneath the skull. This is a tee that just completes your look with the ‘Gucci’ shoes and baggy ‘Supreme’ lowers.

Frida Khalo a mexican painter best known for her portraits, self-portraits and works inspired by the nature and artifacts of Mexico. Here we see the unusual and the artistic and the reverse side of Freiza, a destroyer who looks more like a human than the demon that it really is. This is a tee that goes well with the new modern trend to showcase something as it isn’t. Here we see Freiza in a different light from his usual self. Here he is given a more human look but, just to a point where we don’t notice his evil intentions in his eyes and the grin from right to left. This Freiza merch works especially well as it makes the viewer confused and look more into the modern light of the character than the retro look of it. 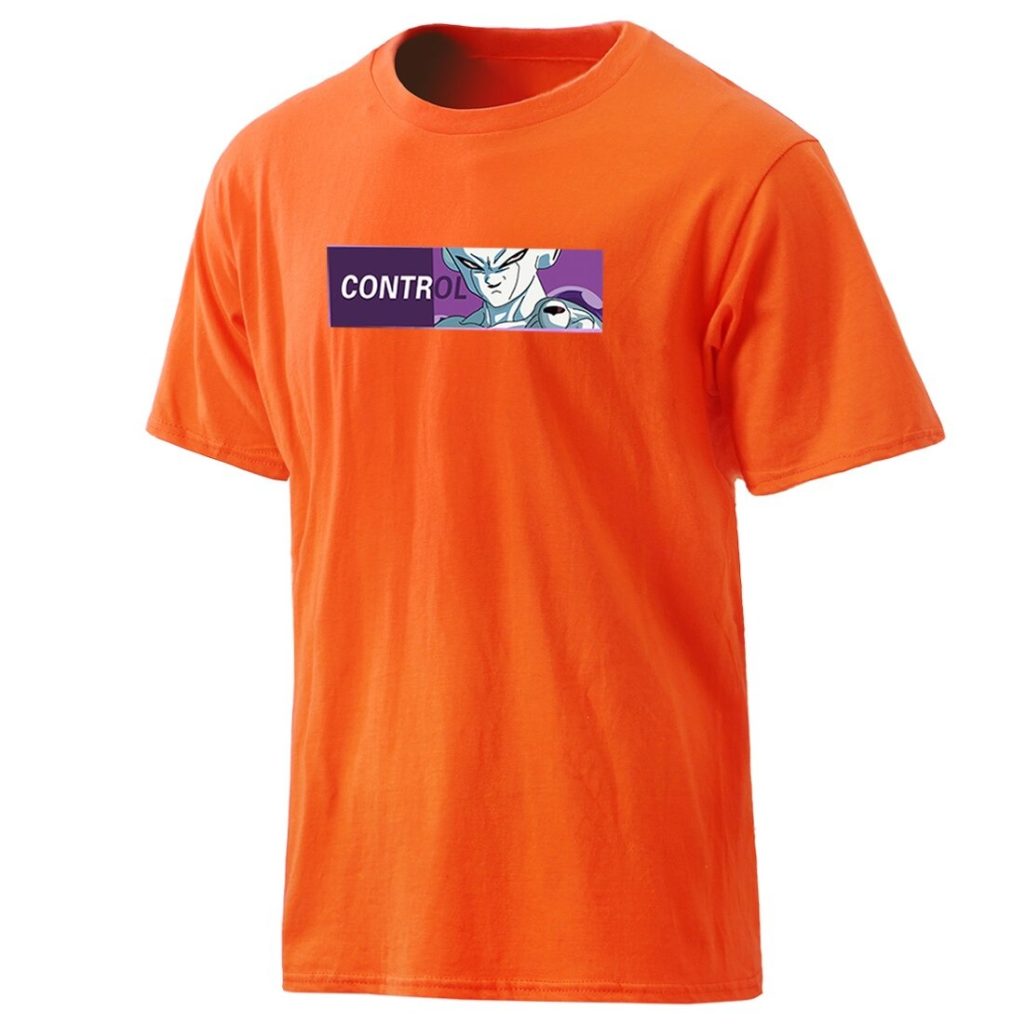 Bringing to you a more subtle and down to earth type t-shirt we present to you this tee. As you can see the background is again in a solid color and the main print on the tee is done with different values, hues and densities of white, purple and violet. This makes the product really simple and calm in nature, giving you the feel of being relaxed throughout. The tee contains a special feature in it. Frieza is present in the tee with the word CONTROL next to him making him look more stronger than he originally is. This word goes on to represent the power in Freiza’s body and mind, also the aura emitted from the plain tee makes it more precisive and classy to look at. This is a tee that truly fits the description of villainous hero in it. 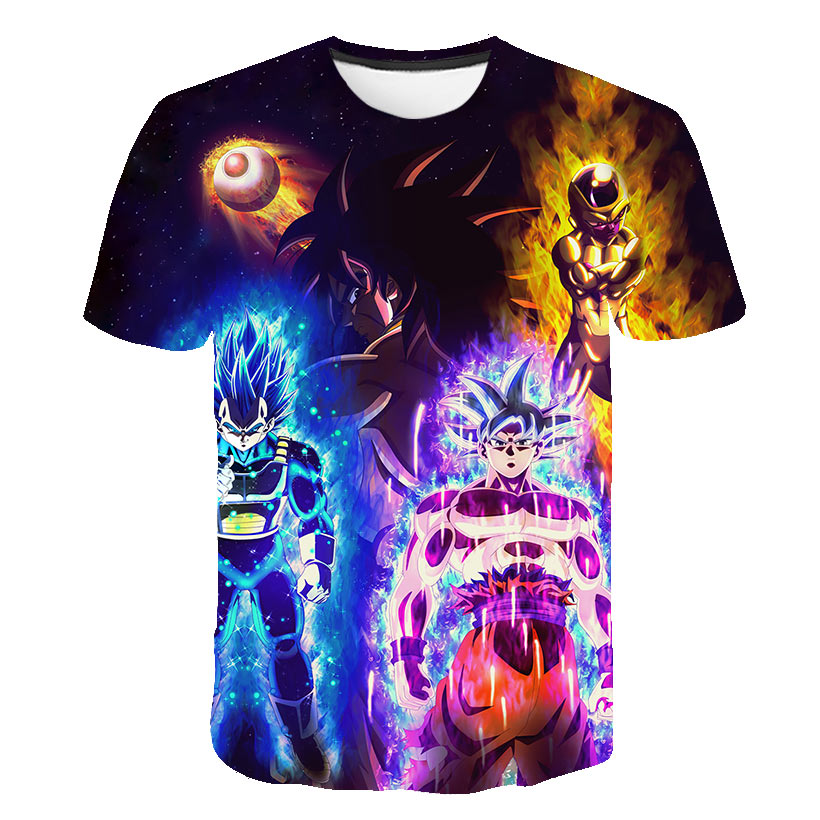 All tee that make the process of expression possible are because of their unusual and amazing colors in it. This is a Dragon Ball Z Frieza Saga Shirt that is slightly different from the rest as this is a tee that gives and initiates two feelings within you, one of it being serious in nature due to the bold and faded color of black and yellow in the background and second of it being simple due to the godly look of Son Goku and Vegeta in the middle and Freiza in the top corner. This tee helps to bring and pop out the sensations of coolness and rigidity from it, due to these two factors making it a rather unique and different t-shirt. The primary color used it in also bring it to the heavier side but unlike the rest of the tee, this helps to make you feel more relaxed than get worked up. 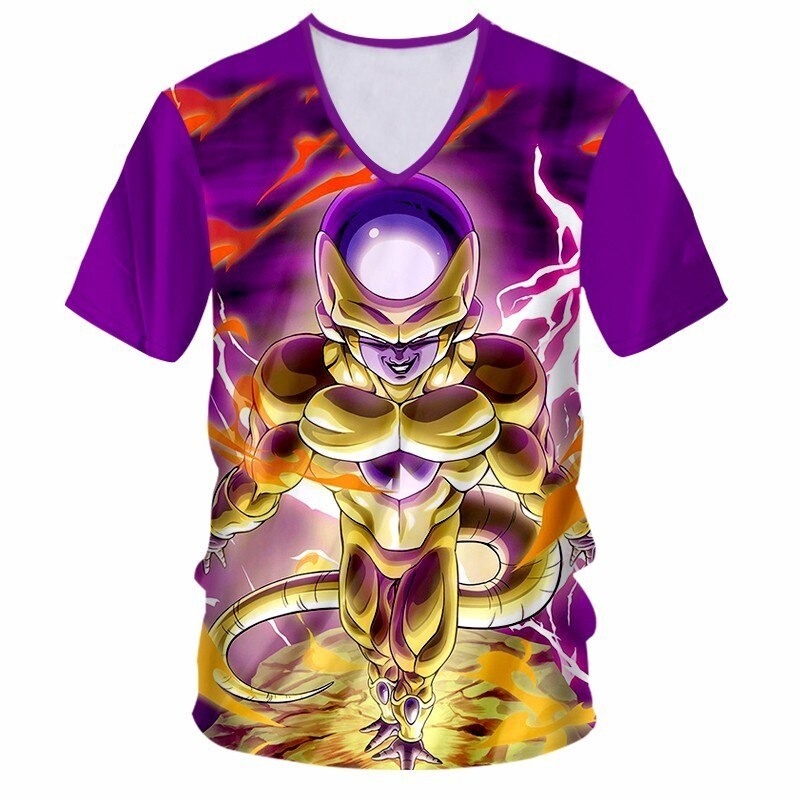 Freiza is no doubt a villain but he is still a kind of god in their own realm as well and showcasing a villain in the same way gets a little difficult as this is something that is only possible if the villain actually is on the good side. However, being unique and different as we do, we bring to you this tee of Freiza, where he is given more a look of a villain but that of a God and a full of destroyer at that. This is a tee that gives him the look that he deserves. A look fit for a hardcore king and a look fit for the destroyer of the worlds. Here the character itself looks all authentic and genuine, it almost seems like he is a person who has nothing more left to lose and it is due to that side of this t-shirt that makes it cooler than the rest. It has a feeling of not only resent but also that of enlightenment and duty towards his own kind.

Son Goku and Freiza have a history as we know and this is a tee that showcases a little of that past that these two shares. Here the print is made in a poster type format, one which has a bounty type feel to it and this is a feature that makes the tee so unique in its own way. Here the two rivals stand face to face with each other, looking at each other in an intense staring contest, a contest that can soon be called off and a fight can be broken out on. From the second and a more dignified look at it we can also make out that the poster is a kind of fight match poster where the characters name is said out and also the significance to their works is given straight down below. “The Galactic Tyrant” for Freiza and “The Saiyan came from Earth” for Son Goku. 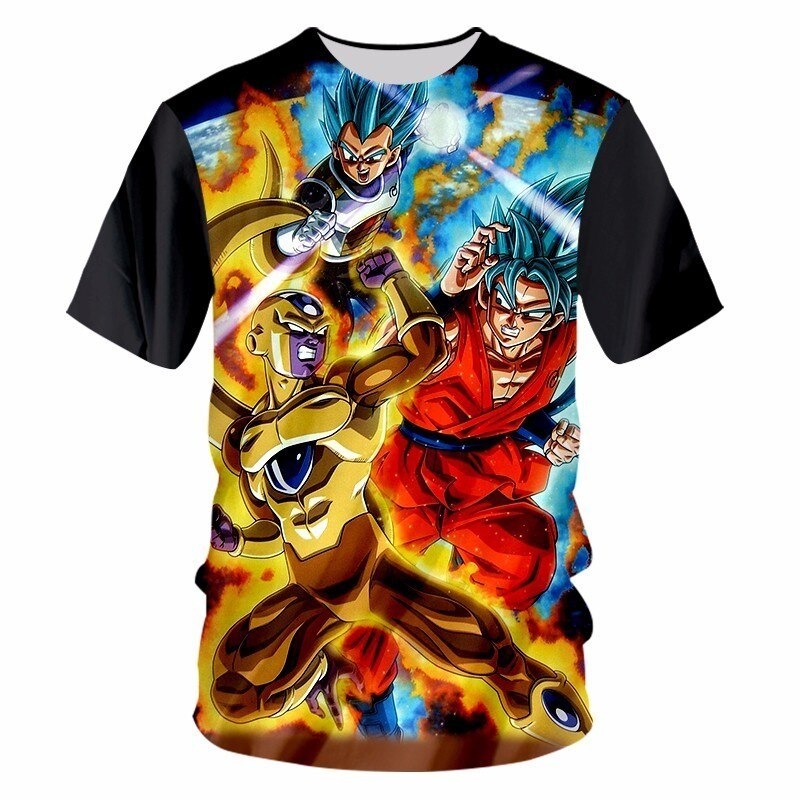 To hit the sentimental and emotional side of a person we present to you a t-shirt and Goku-Freiza and Vegeta Merch with animation on it from the 90s. Here the trio is given an animation that looks straight out of the anime broadcasted during the early stages of Dragon Ball Z franchise. The tee comes in a complete print and this makes it more popping and attractive as a whole. As you may have noticed it the three are in motion which makes the tee all the better, as in here you see the ego and the anger that the three have towards each other being vented out through this fight. This makes the tee one of a kind and increases it value all the much more. ( 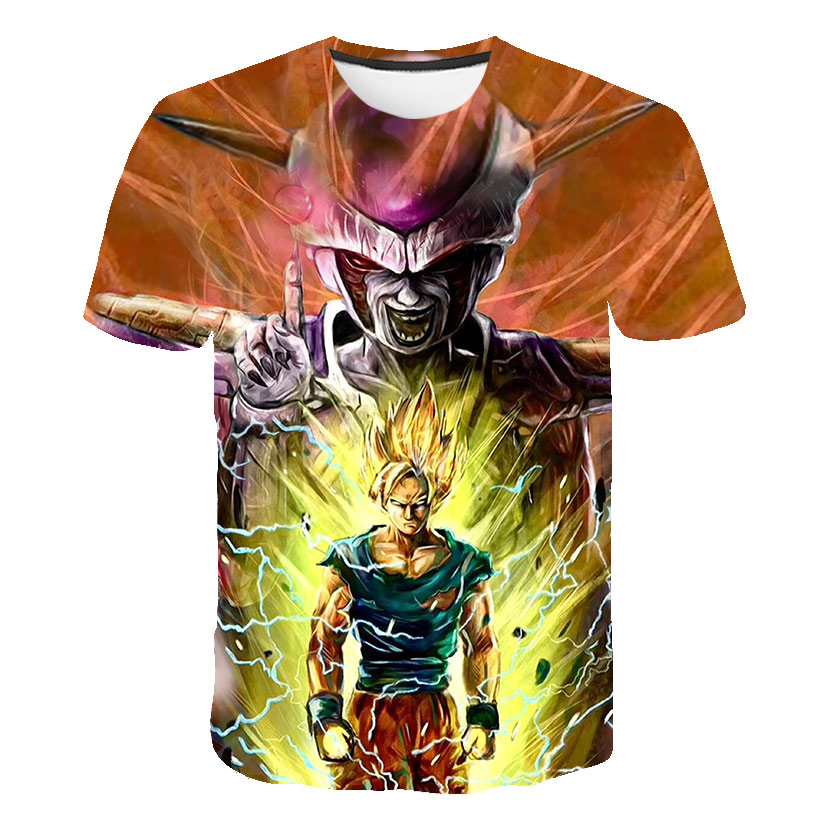 Bringing to you a more subtle and down to earth type tee we present to you this Freiza X Goku Merch. As you can see the background is again in a solid of orange and khaki, also the main print on the tee is done with different values, hues and densities of white, yellow and black. This makes the product really exquisite and popping in nature, giving you the feel of being energized throughout. The tee contains a special feature in it. Son Goku in plain sight is in a fighting and angry stance while Freiza is seen pointing a finger, as if it is to give an order to get back to his formidable rival. This tee is bold in nature and helps to showcase the ego and the aura raging on inside of the two through this massive and detailed print, of how the two are but in bad terms at all times and a fight can be broken out any second. 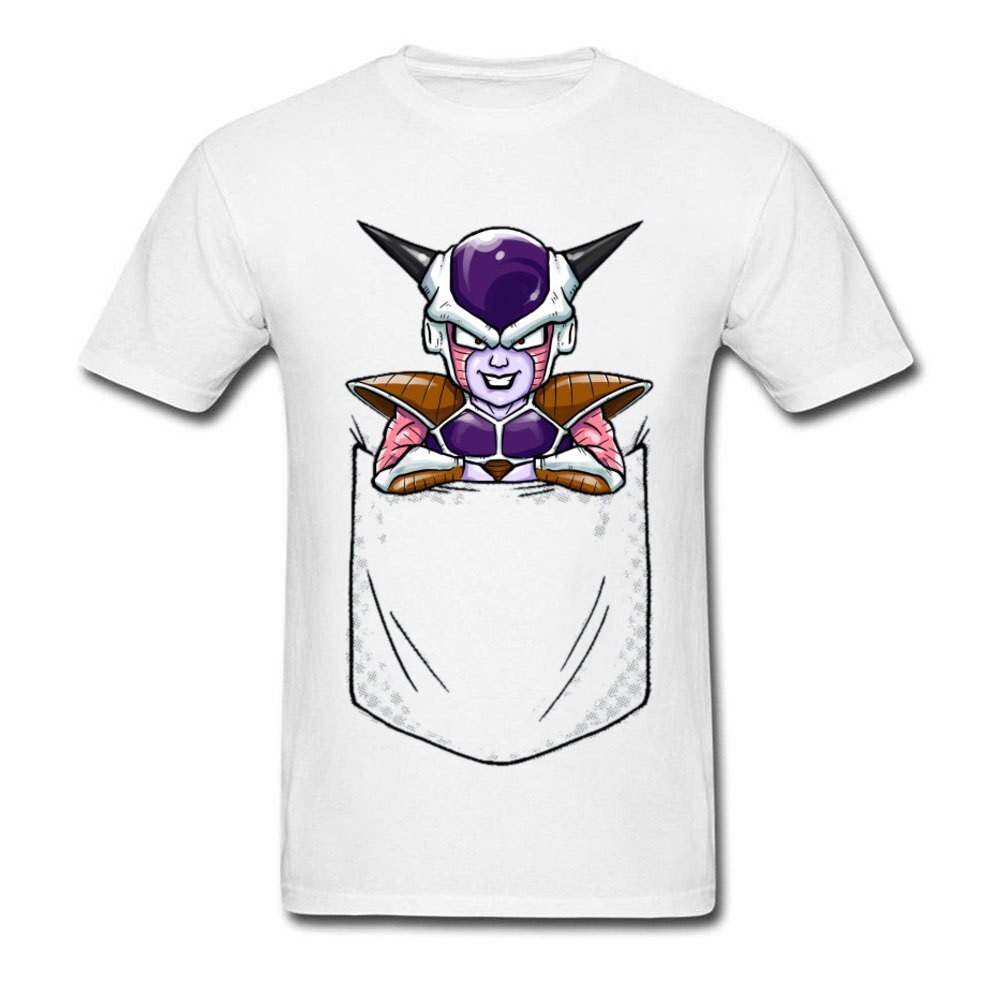 Imagining Freiza as a post-humorous person is something that can never be thought of. It is because of his intimidating look that one can never imagine him as such but this is a tee that again shows to us Freiza in a different and unique light. Here Freiza is made in a animated style where he is depicted inside of a pocket and in a chibi figure on top. The evil grin oh him is still the same though making him come more on the naughty side of the list. However, that is a fact that can be ignored as here he is shown not only in a cute chibi manner but also in a solid color background making the tee more popping and amazing to look at. This is a tee that fits perfect for a group hangout or a date as it is both intimidating and funny in nature.