Dragon Ball is a Japanese media franchise created by Akira Toriyama in 1984, first starting with the manga published in Weekly Shonen Jump and quickly becoming one of the most successful stories in the magazine. Inspired by the Chinese novel Journey to the West, as well as Hong Kong martial arts films, Dragon Ball tells the story of Son Goku as he trains to become a stronger martial artist and travels the world in search for the Dragon Balls, seven magical orbs which summon a wish-granting dragon when gathered. Along his journey, Goku makes several friends such as Bulma, a brilliant scientist and inventor, Krillin, a fellow martial artist and Goku’s best friend, and Yamcha, a bandit from the desert. Over the course of the series we see Goku and his friends battle several villains which become increasingly powerful as the story goes on, borrowing elements from science fiction, classic horror movies, Chinese mythology, culminating in a climactic battle against the evil Piccolo Daimao in which Son Goku and friends become the strongest on Earth. 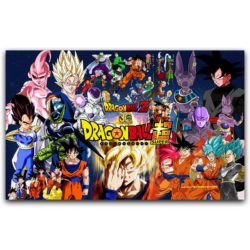 Toriyama’s manga was adapted and divided into two anime series produced by Toei Animation: Dragon Ball and Dragon Ball Z, which together were broadcast in Japan from 1986 to 1996. Dragon Ball Z follows the story after a five-year time skip adapting the final 325 chapters of the manga, which are much more battle-oriented with a more dramatic and serious tone spanning three different sagas. In the first of them, the Frieza saga, Son Goku now grown up and married, is the father of young Gohan and meets his older brother Raditz who reveals he isn’t an Earthling but a member of the Saiyan race, aliens from a different planet who conquer and sell planets to their lord Frieza, opening the story to new heights and possibilities since the entire universe could be populated with warriors for Goku to battle or train with. After reaching the transformation of the Super Saiyan his powers are vastly increased and we reach the second story arc: the Androids and Cell Saga, which introduces time traveler Trunks going back to the past to prevent Goku’s death and the destruction of civilization on Earth at the hands of the two strongest androids made by their old enemies the Red Ribbon Army. Finally the third saga tells the story of Majin Buu, which introduces many deities in different planes of existence in the Dragon Ball world banding together to stop the evil wizard Babidi, who seeks to awaken the ancient demon Majin Buu and wreak havoc on a universal scale.

But what was it that made Dragon Ball a worldwide phenomenon? It is considered one of the successful manga and anime series of all time, with the manga distributed in over 40 countries and the anime broadcast in more than 80. Estimates for the total number of collected volumes sold worldwide range from 250 to more than 300 million copies and it continues to enjoy high readership even today. The values within the story are one of the driving forces that made it so popular and relatable to people of all ages, the struggle to become stronger, the perseverance to train every day and gain ever more strength resulted in Goku “winning the admiration of young boys everywhere”. Manga artists such as One Piece creator Eiichiro Oda and Naruto creator Masashi Kishimoto have stated that Goku inspired their series’ main protagonists and structure, since Dragon Ball turns from a gag-adventure manga to an nearly-pure fighting manga, and its basic formula of lots of martial arts, lots of training sequences, a few jokes became the model for other shonen series.

Main villains in Dragon Ball Z appear as nearly undefeatable enemies who wipe out the heroes when they confront them, some even decimating the protagonists, or committing atrocities on a large scale, which makes their defeat look a monumental victory for the heroes and quite inspirational for the viewers. It really felt like the characters went through a massively difficult ordeal and somehow come out the other end and survived, which made their perseverance fruitful in the end. These were characters who were defined by combat, and you see them training rigorously and in more than a few occasions exerting their bodies to their absolute limit in order to reach new levels of strength, and it was in these scenes that one could really witness the character’s passion for combat and self-improvement. This also gave the battles much more emotional weight, since these weren’t a mere fight between good and evil, but a much more personal confrontation in which their identity and entire perception was built around their pride for their combat abilities and the effort put to develop them through their intense training.

Despite all its martial arts swagger, the story of Dragon Ball centers primarily around a theme of redemption, generally through the exposure of the pure-hearted ideals of Goku and Gohan. Most major characters in the story are introduced as villains but was, through one method or another, converted to the side of good, usually to team up with the protagonists to defeat a greater foe, but somehow the former enemies rarely found the motivation to begin fighting again.

Another theme found in Dragon Ball is the subversion and criticism of popular narratives that were present in the fighting manga genre at the time of its creation. For instance, Goku is introduced as a young, reckless and cheery boy whose actions are motivated by his own personal gain, standing in stark contrast with the idea of a muscular brooding hero who acts almost exclusively to protect the innocent and uphold justice. The Dragon Ball world is also an imaginative combination of science fiction and fantasy that helps set it apart from the dark atmospheres of other fighting manga, and uses heavily stylized visuals with a more cartoonish look instead of the gritty and realistic art of its counterparts. Furthermore, the appearance of ki techniques as powerful as the Kamehameha being accessible to quite literally everyone with sufficient training, as shown by several characters, seems to counter how other manga portray them as some sort of entitlement that only a few select individuals can master and are capable of utilizing.

Dragon Ball also has played a large role in popularizing anime and manga around the world, leaving an enormous impact on western culture, especially since its release in the United States by Cartoon Network’s block Toonami in 1998. Hailed as “the greatest action cartoon ever made” Dragon Ball’s newfound popularity helped to bring about a about a greater interest in Japanese cartoons in the eyes of western youth, which in turn fueled the western anime industry to new heights.

More than thirty years after its initial manga run in Japan, Dragon Ball is still an active franchise with millions of merchandising being sold worldwide ranging from action figures, collectible figurines, plush toys, bobble heads, and character model kits to apparel, backpacks, caps and hats, lamps, stickers, mouse pads and phone cases. Dragon Ball Z video games are created nearly every year for almost every console on the market, helping to introduce the Dragon Ball Z series to younger generations that never got a chance to see it air on television. These games usually do very well in the market. Popular sites such as YouTube have attracted large Dragon Ball Z fan communities over the course of the last few years, and Dragon Ball related videos receive many views. All of these examples showcase the incredible popularity of Dragon Ball Z in many countries of the world.