In this article, we are going to discuss the 10 must-have coolest Goku T-Shirts for every Dragon Ball Fan 2020. You can buy these T-Shirts from our store.

Goku, the first superhero we came across. He’s someone who introduced us to the word ‘justice’ and showed us what it means to be a hero. From being a mischievous kid to taking on the best the universe had to offer, he’s certainly come a long way. His whole story is like a legacy, one that would never be forgotten as long as life exists for Dragon Ball is a legend itself and Goku is the one responsible for most of its greatness. Goku’s been us the majority of our lives making him feel like someone really close to us even though he’s a fictional character. I’m sure a lot of Dragon Ball fans feel the same since Goku was always someone all of us looked up to and wanted to be like when we grow old. I remember how kids used to do those pushups back in the Dragon Ball days and had these sparing matches with each other to see who came out on top. Kids are cute now, aren’t they? Childhood memories are never forgotten and tend to be as vivid as they were day 1. Our love for Goku is unconditional and knows no bounds and it’d be so cool to have Goku T-shirts to put it out there labeling ourselves as super fans. I’m sure we’ll be attracting a lot of attention. So get ready to style and dive into the 10 Must-Have Coolest Goku T-Shirts For Every Dragon Ball Fan 2020. I’m sure by the end of it you’ll be having a really hard time choosing one Goku T-shirt since we got a lot more from where they came from. 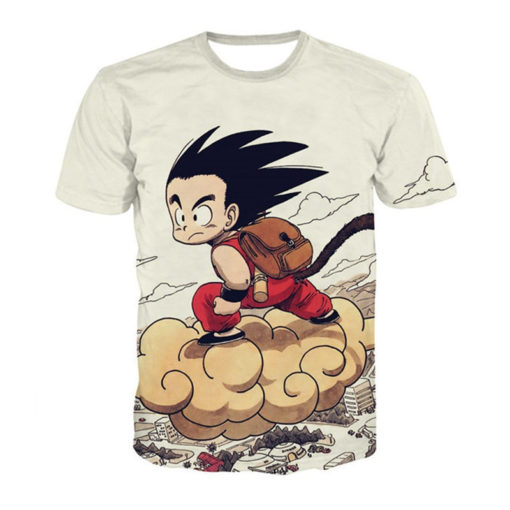 Let’s go all the way back to when we were kids. When watching Dragon Ball every evening was the way of life making things a lot easier. Oh how I miss those days. But still, I was pretty jealous of Goku going around the town wherever he likes making us want a nimbus painted skateboard. I actually tried to create one but it didn’t end well. This Goku T-shirt is something that would bring in the vibes, fill the whole place with nostalgia like never before. It would roll the clip right in front of our very eyes making us remember those halcyon days once again. The design makes the Goku T-shirt stand out a lot since it reminds us of the beginning, reminds us of the boy that took us on the journey that’s so memorable for us even today. 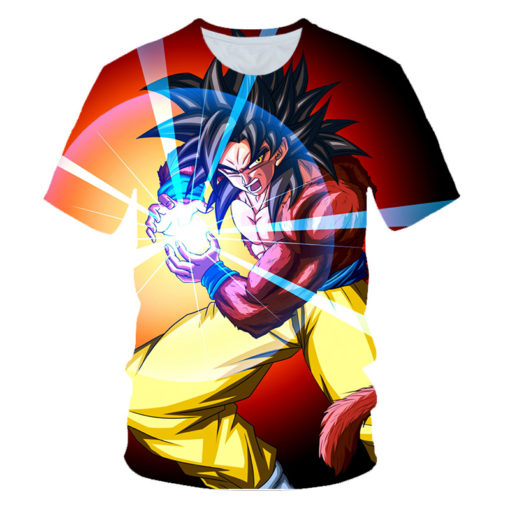 Let’s borrow Trunks’s time machine, I’m sure he won’t mind for the nice guy he is. GT was something that at that time just came up with a lot of queries and unlike the purpose for which it was created for, it just made a lot more question marks pop up in our head. But we can’t deny the fact that it added to the cast of characters with faces that made Dragon Ball all the more entertaining for us. With Lil Goku coming back in the house we were all excited as the old Dragon Ball days were coming back once more in a brand new setting. But they sure took it to the next level by giving us the highly awaited Super Saiyan 4 form, the one everyone had been desperately looking out forever since that sick Super Saiyan 3 transformation that had Babidi and Buu in disarray. This Goku T-shirt is especially a treat for those GT fans who just can’t help but rewatch it again and again despite it being the least favorite for most of the fans. 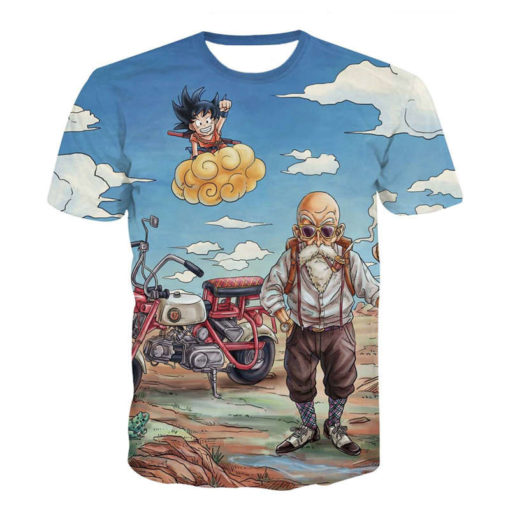 Roshi and Goku are the best teacher-student duo out there. Whether you’re a Naruto fanatic who just can’t get over the Team 7 fever or are new to anime and have to watch Tanjirou’s tears over and over again every day or there’s just no sleep that day, you can’t deny the fact that Goku and Roshi take the cake for sure. From that entrance exam, Goku and Krillin took together as buds to fight in the once in a lifetime multiverse tournament that had the best of the best going at each other’s throat just to have a wish granted. The whole genie thing is just too fascinating now, isn’t it? It’s the perfect Goku T-shirt for everyone who loved the training sessions they themselves undertook to learn those techniques. You know, I’m talking about the ones you took bringing your hands together to gather that energy. We all tuned in that class together. 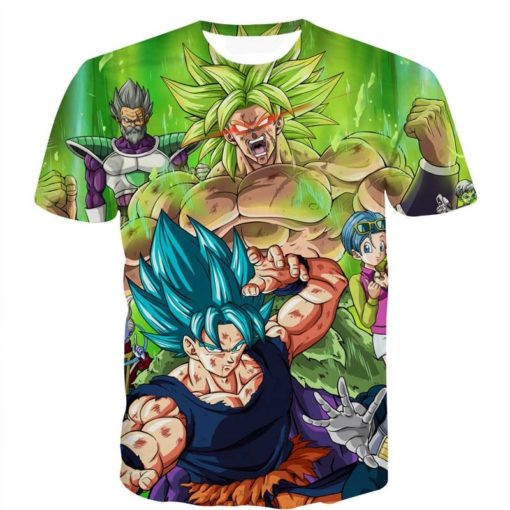 Being the strongest one out there the moment he appeared on the screen, Broly was in a league of his own. He made us rethink the opinions we had when it came to Goku and Vegeta. He literally wiped the floor with them and all of them to be exact. All the Z warriors were there to be his punching bag and Broly sure enjoyed it. One of the best comebacks in anime history, Broly sure was introduced to the next generation since they sure missed out on a legacy. Still, the movie was a hit, topping the charts all over the internet-breaking a bunch of records. The bout Goku had in that movie, both going in solo and as a duo with Vegeta is one of the best-animated fights out there. This makes it a perfect Goku T-shirt for the new movie fans who were literally mesmerized by the movie watching it over and over again. 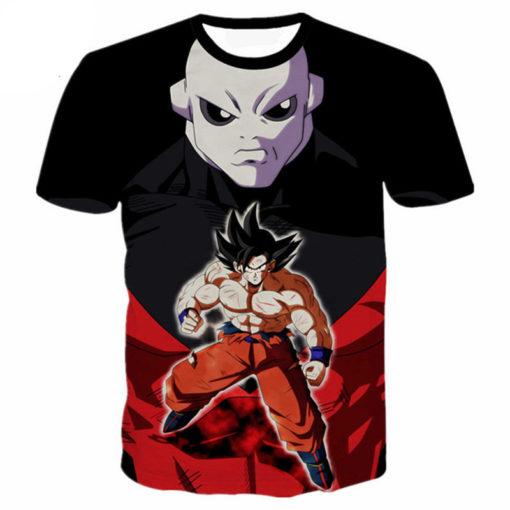 Jiren fans, assemble. We’ve got good news for you since you’ll be having a chance to join the Pride Troopers. The multiverse fighting tournament had a lot to offer. All new faces packing all-new abilities. They made it look spicy and brought the mystery element to the scene, one that’s not there in Dragon Ball for the most part. Jiren from the get-go was this guy who was sure to win the tournament without even lifting a finger. Anyone he came across he just pummeled the ground with since his fists knew no equal. It looked like he’d win in an instant, not many looking to be able to hold their ground in front of him. But Goku’s always the one we look up to when things go south. It’s the perfect Goku T-shirts for the Jiren fans who think of Ultra Instinct as the best power spike to date. 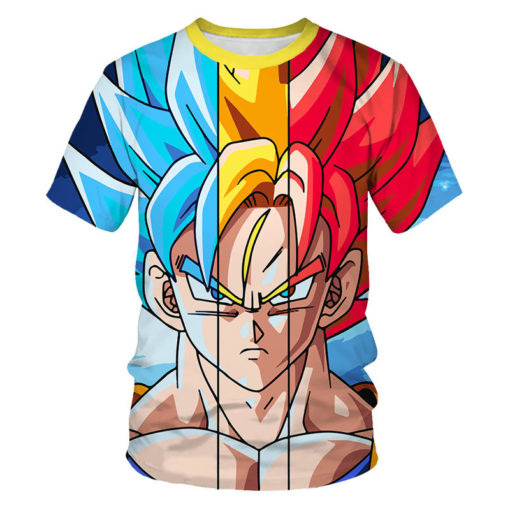 An all in one right here. Goku has had a lot of power spikes and all of them are very memorable since the next few minutes to come were so full of adrenaline and hype that you just can’t forget them no matter how hard you hit your head to the ground. The best thing about this Goku T-shirts that it takes things up a notch by throwing in the Goku Black Super Saiyan Rose form that was something completely new, giving Goku a whole new look since Goku black is actually Goku but on his way to a cosplay fest looking in a mirror. The most iconic of the transformations are all here making you remember all that went down the moment they were on the screen. 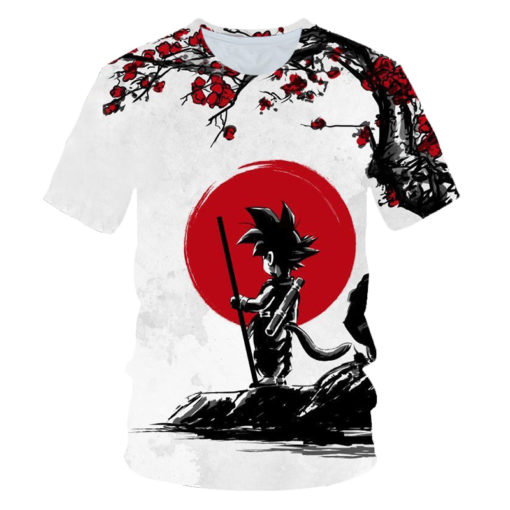 A fan of the Japanese culture? You’ve come to the right place. This is a combo that brings you the best of both worlds. It’s the perfect thing a Dragon Ball fan could ask for. The artistic design to the aesthetics, it’s like the complete package you have in your hands. This Goku T-shirts truly one of the best since it’s so simple yet so aesthetic that it feels like something super Gucci. It makes us remember the old Goku in an instant, making us remember all that dinosaur meat he ate for breakfast and for lunch and for brunch and for dinner. 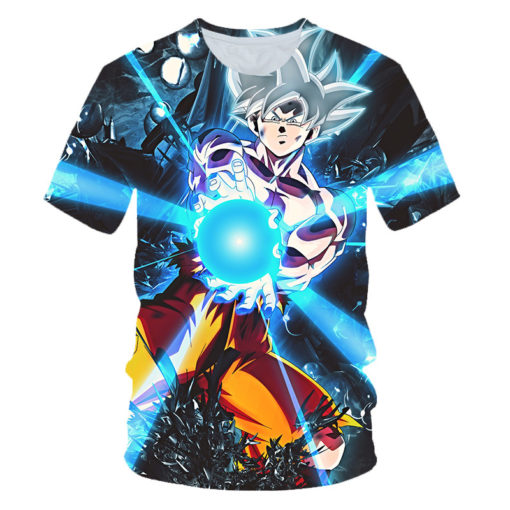 Goku sure styled on Kefla back there. From showing those smooth moves that we’d never seen before making it look like Goku had been taking some fine classes to bring in the big guns making us hold our eyes open the entire time, those few episodes had a lot going on. That potara fusion we saw back in those Vegito days was redefined and redone on brand new characters making us see the same experiment on new characters. It was really cool seeing those earrings once again. That iconic fight ended on a high note with Goku sliding on Kefla’s move following it up with that Kamehameha. It was truly one of the best things in Dragon Ball. It makes for a perfect T-shirt who thought and still think that scene to be the perfect outplay in the Dragon Ball universe. 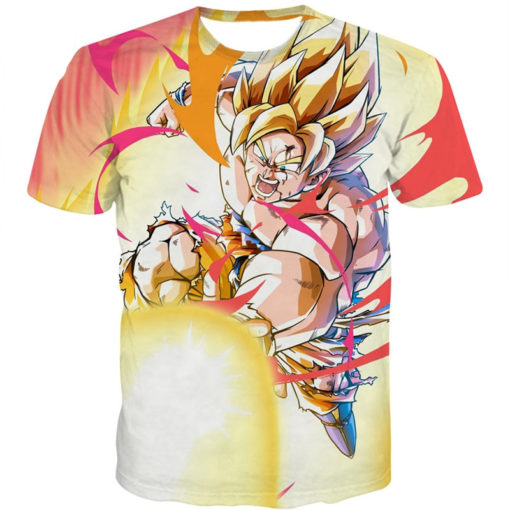 Goku vs Frieza is truly the best fight in anime history. Everything was so well executed that it made us forget all else that was going on at that time. When things looked like they had come to an end and it was all over, Goku just started walking away as he does, not wanting to finish off his opponent since that’s what the good guys in anime do. But Vegeta is the most evil being to ever exist and he made that statement perfectly clear when he shot the same energy Goku gave him and shot it right back at him. What a pleasant grateful person he is right? Goku and Frieza had the best rivalry anime had ever seen. That’s for sure. This makes Goku T-shirts something that would make you relive that iconic fight every time you wear it. 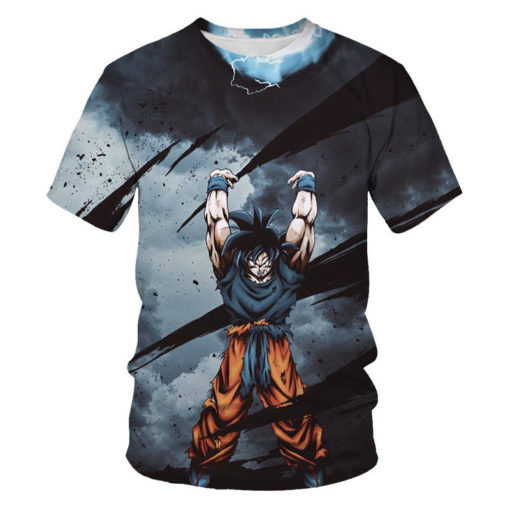 The Spirit bomb is like the last resort Goku has. He only puts his hands up like that when he’s unsure of whether his fists would be enough to finish the one standing in front of him. Of all the spirit bombs the guy has come up with, the Namek one stands out the most since it was like the first actual Spirit bomb in Dragon Ball. At first, we didn’t know what was going to happen since you never know what Goku has up his sleeve. But as it grew bigger and bigger, we all had an idea that we were about to see a brand new move, one we won’t be forgetting for an eternity to come. This Goku T-shirt commemorates the introduction of the Spirit Bomb in the series, the op move that brought down the best the anime had to offer.