The virus really messed up the year. All those plans we had all needed to be postponed to a later date. That later date being something no one knows for certain. But life itself is the most important thing and everything else comes after that. After all those years, after enduring all that came our way always ready to beat us down, we got back up stronger than ever. We can’t let a virus beat us at the game called life now, can we? But no war is fought without weapons and arms. Face masks are the only weapons you need in this Virus Invasion Arc which would surely be great character development for each and every one of us. Better have that extra protection teaming up with Dragon Ball fighters, some of the strongest in the universe. So let’s get ready to grab one for ourselves and count down to the 10 Best Selling Dragon Ball Face Masks 2020. 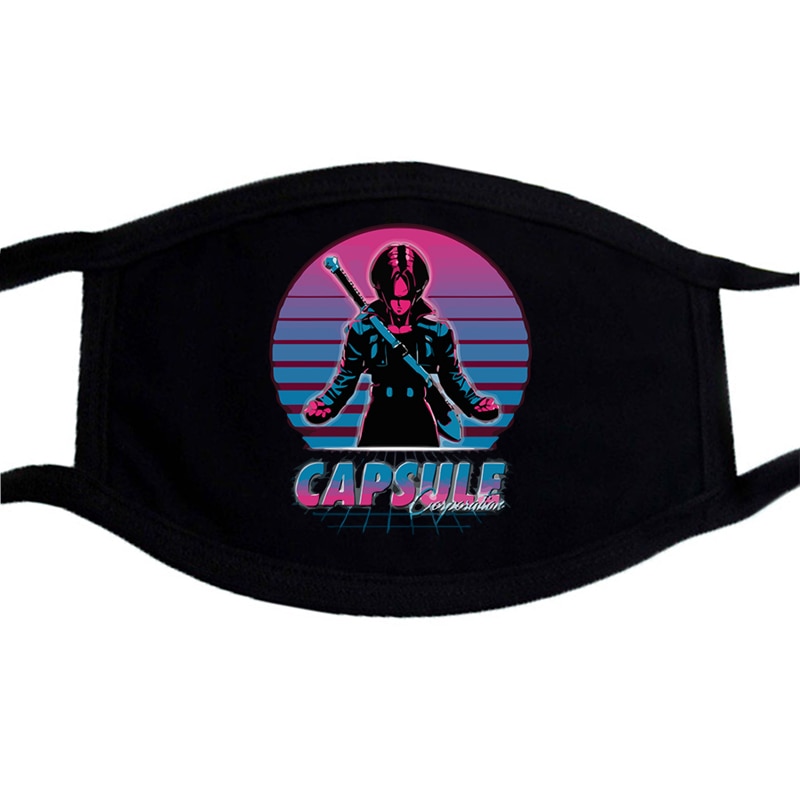 Trunks never looked cooler. It’s as if Trunks is standing in the middle of the dance floor ready to show us that the sword isn’t the only thing he’s good at. This looks like if Dragon Ball was set in the Katana Zero universe making us see the world in those neon colors with that sick soundtrack in the background. You can’t help but get those feels by looking at it. Still, it’s a great spinoff kind of thing and mixes things up making us see a completely different side of Trunks. We’re mostly used to seeing all the serious kids who just can’t get a break. I hope he had a good time while posing for this. 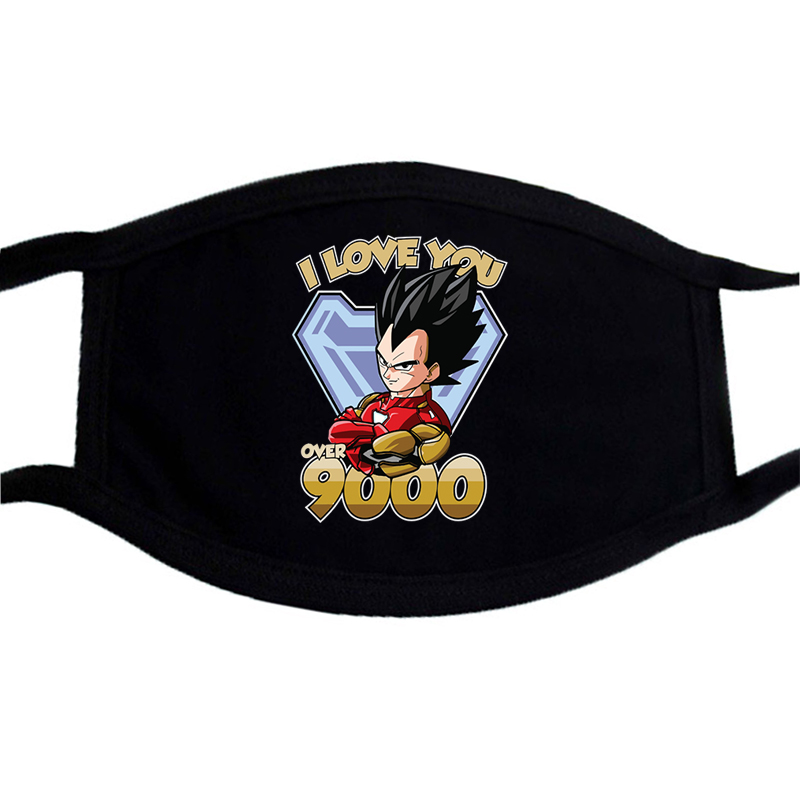 With all the social distancing going on the only dates you’ve gone to are the ones on the internet. Wearing those masks, it’s always this game of figuring how the other person is reacting behind the mask. But this one comes in handy in the most clutch situation out there. Confessing your feelings for someone is a task that even the manliest of men out there struggle with. It’s understandable since pouring your heart for someone it beats for comes with a lot of risks, the risk of losing them forever. But with this face mask as your wingman you’ve got nothing to worry about. It’ll do the talking for you making you think thoroughly of how to proceed with the situation from that point onwards. Cause our mind just goes blank in that situation. I’m sure a lot of you agree. 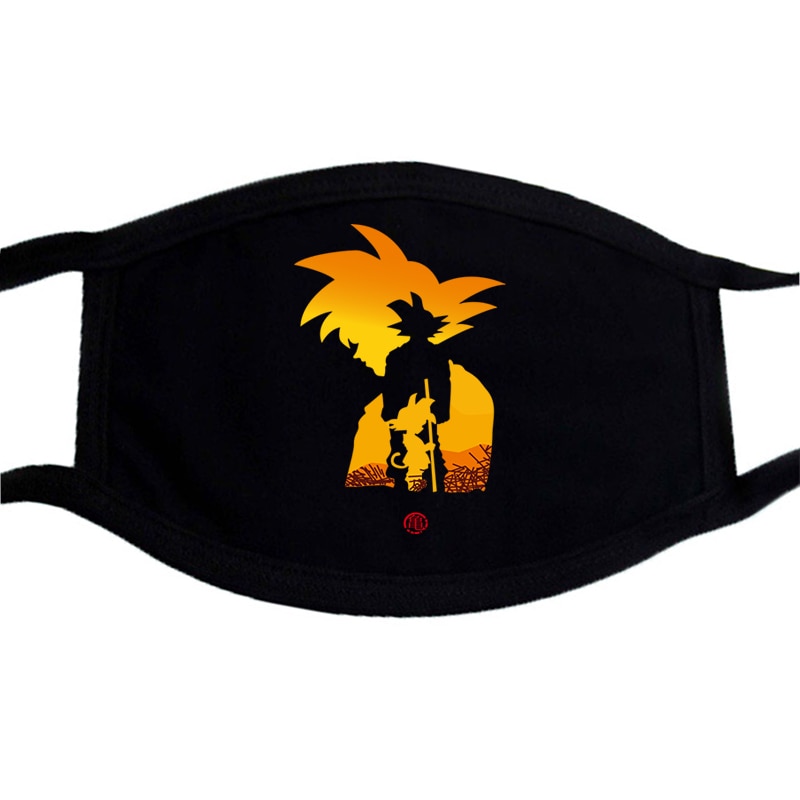 Dragon Ball has been one hell of a ride. It’s been entertaining us for a while now and we just can’t help but want more of it. Everyone loves Goku. I mean with that personality and character, even Frieza would start missing him if he’s gone for a while. This right here is like Goku’s life summed up in front of us. From the kid that was all over the place making friends while getting them in trouble almost every time to participating in the multiverse tournament featuring a ring only the strongest can set foot in. He’s sure to come a long way. 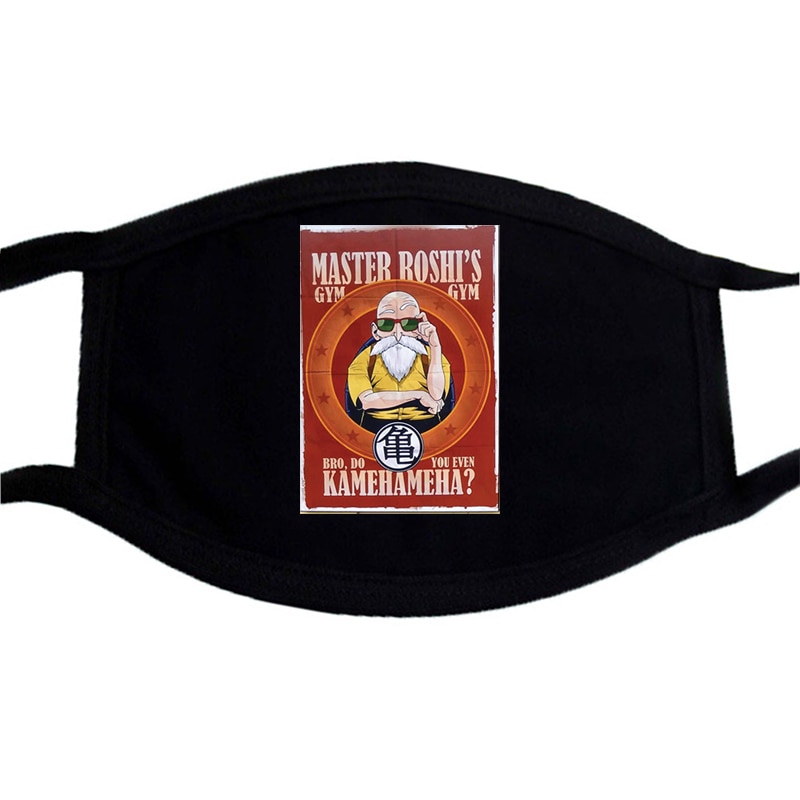 Sure you can find a gym anywhere in the world. With staying fit and healthy being a necessity in this day and age, everyone wants to give it their all to get that look. I’m sure people would come up with all kinds of things to advertise their gym, recruiting more members. But I’m certain no one would come up to you and ask this right here. Back in the day posing for the Kamehameha wave was something everyone tried to practice for at least ten minutes straight almost every day. But no one accepted that fact since it was embarrassing. You could recruit a lot by wearing this face mask especially if the person in front of you is a Dragon Ball fanatic. Business is booming in almost no time.

Don’t let that cute face fool you. The kid is a literal beast when it comes to fighting. Kid Goku was always underestimated and thought of as this playful kid who wouldn’t even hurt a fly. But things sure took a completely different turn the moment the sound of the gong was heard in the background. Goku sure does super Gucci in this one partnering with Adidas since everyone’s a fan at this point. This brings the best of both worlds. 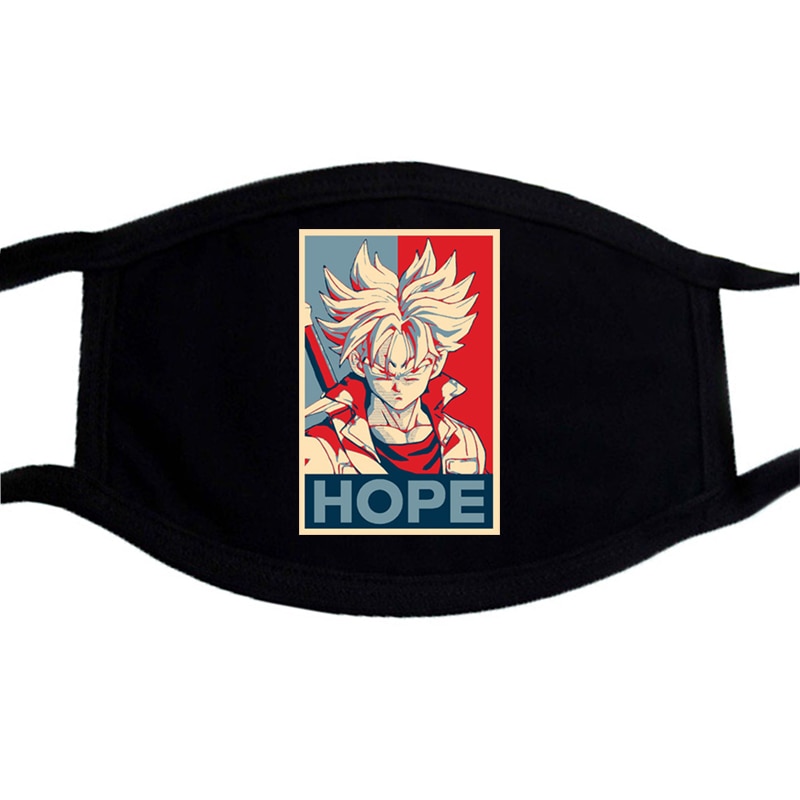 Trunks you poor boy. Just can’t get a break. Ever since his debut, he’s been in this constant struggle of wanting to fix his timeline. His timeline is always in this post-apocalyptic state whenever he travels back in time to ask for assistance. How can two twins make the Earth nothing but full of buildings razed to the ground? Wait that’s not all, we’ve still got a cell in the hiding. Trunks just can never take it easy and are always on the lookout since in his timeline the worst possible scenario is always the real one. Show your boy some love and make sure he has your support in these tough times. Be the umbrella that saves him from the big black cloud over his city. 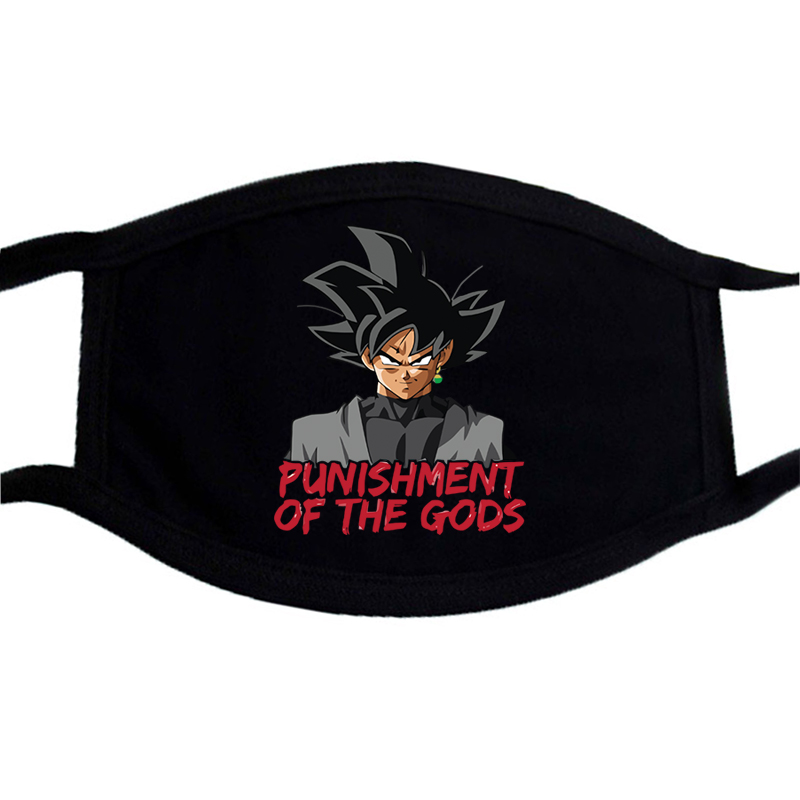 4. Punishment of The Gods

Black ready to wreak havoc all over the place. Black was the most complicated Dragon Ball face Maskshas ever been. Sure the timeline stuff and all had some thinking whether Dragon Ball was playing an April Fool’s joke or something. But with Zamasu and Black, I’m sure a lot of us had to be fully attentive during the entire runtime of the episode. But that arc was one of the best Dragon Ball has come up with. The menacing look is here and Black is all armed and ready to wipe the floor with anyone who comes at him. 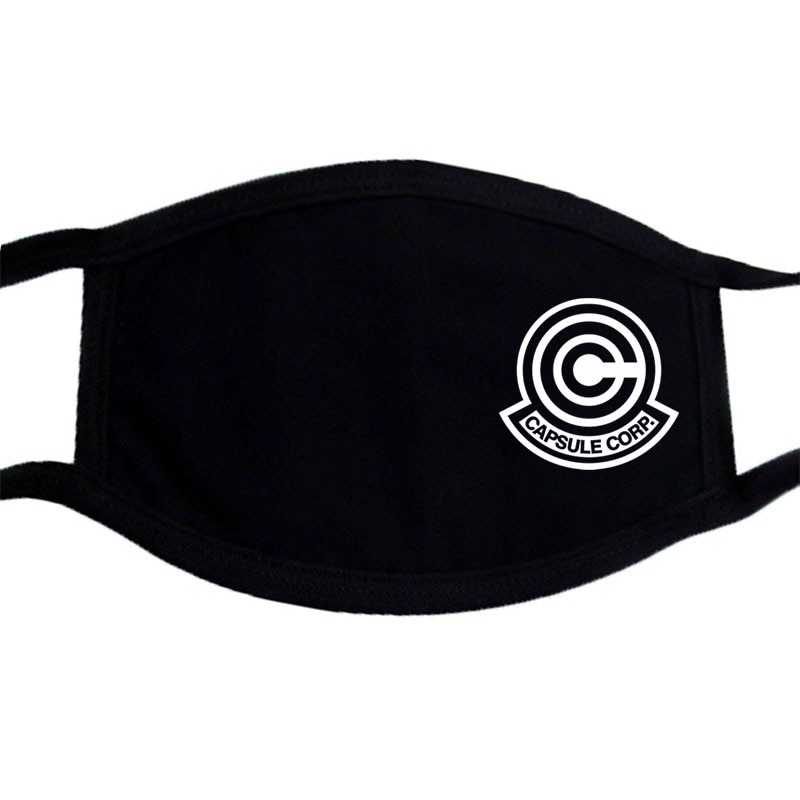 Sometimes being simple is the way to go. Capsule Corp. is like Microsoft when it comes to Dragon Ball Face Masks. They have all these gadgets that make Dragon Ball look way ahead of its time. But then we see a kid playing with Dinosaurs and flying around in a cloud. It’s like completely different worlds in the same anime. Dragon Ball Face Masks can be pretty dramatic at times. I’m pretty sure everyone agrees with me on that. But if you’re someone who likes to draw as little attention as possible while still wanting to wear something cool and slick, this is the best one for you. It’s like having sponsorship from the corporation. Big bucks. 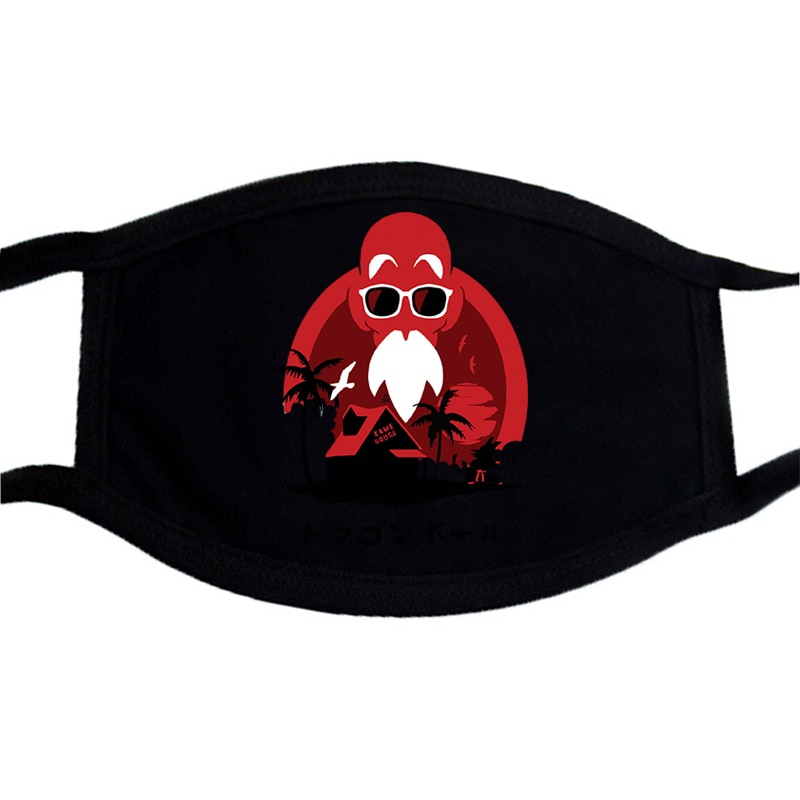 Roshi you naughty geezer. But don’t worry we love you for all you’ve contributed to the series. He’s the reason Goku is who he is today. This one makes Roshi stands out for sure. It’s like he bumped into a hot chick, the hottest one to date. He then bled so much that his whole island including his house turned bright red. Apparently he gave his beard a twirl while looking at the mirror. So it’s white. I’m pretty sure that would never happen since even Roshi knows his limits. But that’s the only explanation I can come up with. What if he’s written that ‘ KAME HOUSE’ in red with his own blood? Interestingly, I gotta look into that. 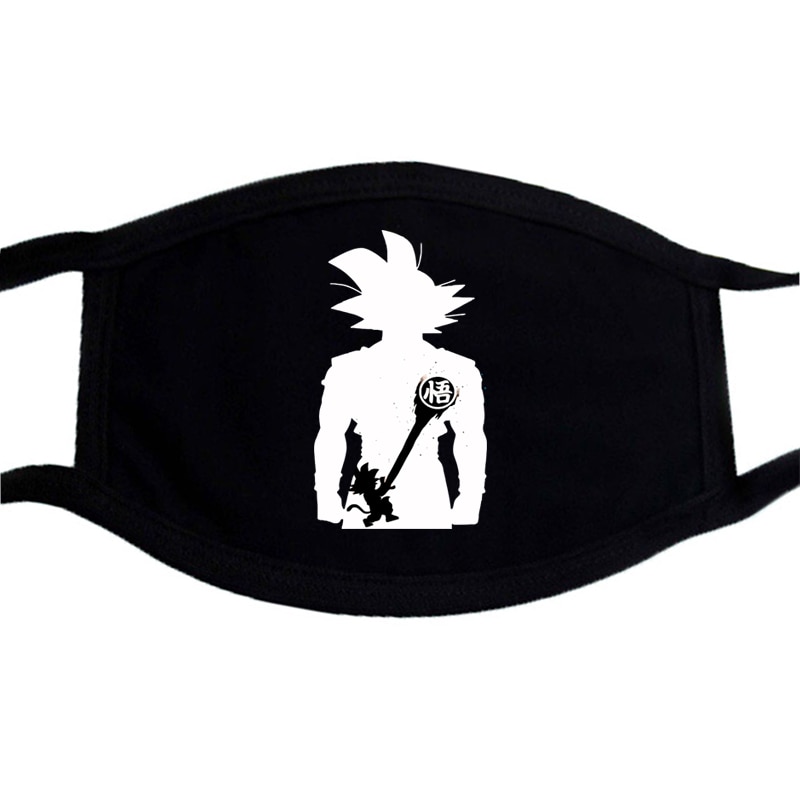 10/10 for the design. It looks so simple yet something only the most imaginative person out there would be able to come up with. We’ve seen Vegeta shooting a Big Bang into the sky for it to act as the moon transforming him into the Oozaru form. But this takes things to the next level. I’m pretty sure Goku respects his mentors a lot. I mean we saw for ourselves during the multiverse arc. He was really worried when Roshi got unconscious. Same with King Kai. He always counts on him when things take the worst possible turn causing him a lot of trouble at times. You know you love someone when you can count on someone like that. It’s like the young Goku is paying homage to his old teacher, the one who taught him and made him go to that next level. Plus in the anime, we know that he trains a lot. Like to the very bone since he wants to protect everyone dear to him making sure that planet Earth gets to see another day. Even in that hypergravity chamber on his way to Namek, he was giving it his all. The symbol standing for enlightenment and wisdom isn’t something that’s gained easily.